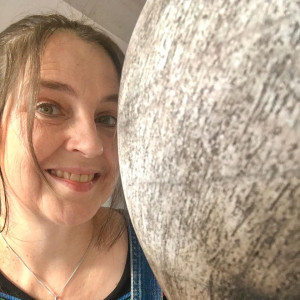 Ruth explores form, texture and surface with her thrown and coil-built clay vessels. Echoing shapes from the past, the work draws on prehistoric ceramics, particularly the forms of Moravian painted-ware.

Ruth pursues the vessel as pure form, unleashing the foot, neck, lip and belly from their purely functional constraints. Her use of smooth white porcelain and heavily textured black clay creates a contrasting tone and texture. Surfaces are raw, glazed or marked by smoke-firing – the process of trapping carbon to create distinct tonal effects and qualities.

Captivated by seeing Lucie Rie’s 17th Century Korean Moon Jar in the British Museum, Ruth began working with large spherical forms. Her Moon Jars, unlike the traditional Korean thrown pieces, are coil-built with layers of pressed, grogged clay and smoke-fired to create the lunar-like surface. They also feature a raised foot which creates the illusion of weightlessness, lifting the spherical form. Floating Bowls have the same feature.

For Ruth, the action of throwing is the meditative repetition of a fluid process. The most successful finished works retain that essence of movement and growth in their final form. Subtle throwing lines spiral up to the rim from the centre, evoking life in its circularity and the cyclical nature of time. The Spiral Bowls accentuate this further with the addition of brushed-on white slip.

Subtle refinements made throughout the making and finishing process affect the whole attitude of the resulting forms: lively, subdued, hopeful or dignified.

Ruth trained in 3D Design at Bournville College of Art, Birmingham and then in Studio Ceramics at the University of Derby. For many years she produced earthenware tableware, establishing studios in Derby and then Dumfries & Galloway where she has lived since 1999. She has exhibited across the UK since 1990.

Ruth is a passionate educator and has had a long career in Further Education and community settings. Teaching hundreds of young and mature students how to work with clay, she has inspired and guided many successful new artists on their creative paths.

She has 2 children and lives and works in a small rural village in South West Scotland.

New dish forms out of the kiln today, textured bla

Black Pod Form, thrown in two halves and joined an